skip to main | skip to sidebar

Can pickles? Yes, you can!

My family likes pickles.  A lot.  And this week we were given a load of home-grown cucumbers, and so I decided to can some pickles.
I have seen it done before... never attempted it myself.
It turns out that it isn't so difficult.
Here is the recipe from the world-famous Tompkins Family Cookbook:

Fresh dill heads (the part that looks like fireworks... you want green ones, not brown)
1 quart vinegar (I used white vinegar)
3 quarts water
1 cup canning salt
1/2 tsp. tumeric
3 or 4 bay leaves
Cucumbers (sliced as you like them)
Garlic cloves, peeled

Pack clean jars with cucumbers and 1 head of dill  and 1 clove of garlic in each jar.  Bring water, vinegar, salt, tumeric, and bay leaves to a boil.  Pour into jars over cucumbers.  Fill to 1/2 inch below the rim.  Seal jars.  Turn jars upside down for 15 minutes.

I quartered the recipe... and made four pint jars... I know this picture has only three.  The fourth jar was nearly empty by the time I took the picture. 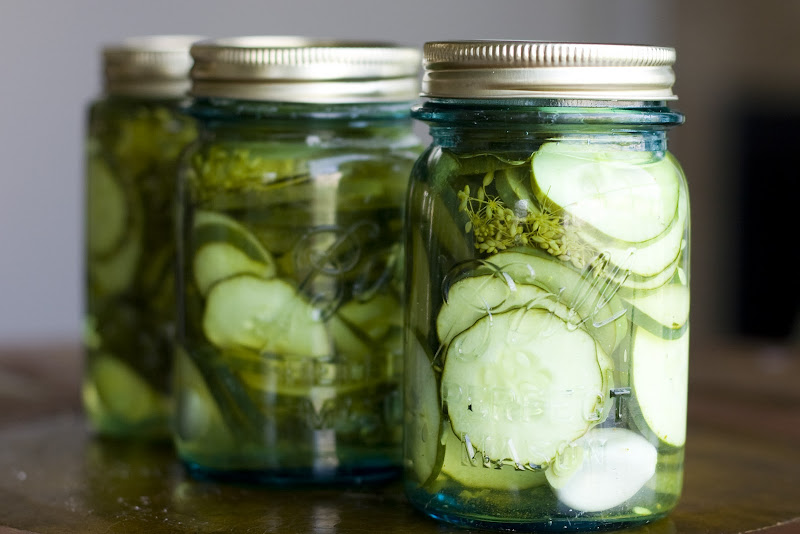 Make sure your jars are clean and sanitized.  Lids too. Makes a delicious breakfast!
Posted by Karyn at 11:20 AM